Questions to consider while studying about the Cold War in Latin and South America:​

​How did the Cold War affect the geography of the region? How did the Cold War affect the economics of Latin and South America? How did the Cold War affect the political climate of Latin and South America? What are current issues troubling the area that exists currently caused by the Cold War?
Latin America in the 1890s was a society primed for the dissemination of socialist ideologies. It was ruled by autocrats and oligarchs who were exploiting an increasingly discontented peasant populace and perpetuating a sharply divided two-class social structure. During this time, increased productivity and foreign investment ushered in the earlier stages of exploitative capitalism as well as a wave of European immigrants advocating the Marxist philosophies upon which socialist and communist movements were being built in Europe. The spread of this ideology was acutely evidenced by its recurrent presence in Latin American literature and art, most notably in the Mexican mural movement in the 1920s and 1930s. Led by famous artists such as Diego Rivera (1886–1957), José Clemente Orozco (1883–1949), and David Alfaro Siqueiros (1896–1974), the mural movement initiated decades of controversial socialist and revolutionary expressions in art and culture throughout the continent.

A period of increased productivity and foreign investment in Latin America during the latter part of the nineteenth century attracted a wave of Italian, German, and Spanish immigrants who spread Marxist ideas throughout Latin America. This feudal, medieval, Catholic, and patrimonial region translated these ideas into a movement against its hierarchical two-class agrarian-based system. Following the Great Depression of the 1930s, leftist political parties emerged that promoted a strong role for the state in directing change, a leftist ideology, and anti-American nationalism. The next two decades were marked by instability and conflict as authoritarian, democratic, and communist groups vied for power.

In 1954 the United States intervened in Guatemala to overthrow a leftist regime that the United States said was communist. Four years later Fidel Castro led the successful Cuban Revolution. Cuba became the first openly socialist country in Latin America, the first to ally itself with the Soviet Union, and the first to openly turn its back on the United States. As a result, anticommunism in the region gained powerful U.S. military, political, and covert backing. Cuba added a new Marxist-Leninist "model" for Latin America and consequently made the prevention of "another Cuba" the central focus of United States policy. The United States chose time and again to support anticommunist military regimes over unstable democracies that believed in freedom for leftists. As workers, peasants, and guerrillas mobilized throughout the region, the traditional elite power-holders turned to their armies for support and received the backing of the United States, thereby ushering in twenty years of conflict and military–authoritarian rule.

The most famous U.S. anticommunist engagements in Latin America included the 1961 Bay of Pigs fiasco, in which the CIA trained and financed 1,400 Cuban exiles who were supposed to incite a popular revolt against Castro, but were instead arrested upon arrival. In 1962, the Cuban Missile Crisis brought the world to the brink of nuclear war, when the United States discovered that the Soviet Union was attempting to assemble nuclear missiles in Cuba. In 1965, the United States intervened in the Dominican Republic to prevent what it thought was a communist uprising.

Internal anticommunist movements also emerged throughout the region. One notable example of this was in Chile. In 1973 General Augusto Pinochet, head of the Chilean army, overthrew democratically elected, but Marxist, Salvador Allende in an attempt to save the country from communism. Leftist parties were banned and their supporters exiled, tortured, or killed. Pinochet subsequently shut down the old political system and established a personalist dictatorship that maintained power through violent repression for more than a decade.

In Nicaragua, a Marxist guerrilla movement known as the Sandinista Liberation Front gained much domestic and international support by the late 1970s. It forced the powerful Somoza family from power and established the second openly socialist regime in Latin America. The contras emerged as an armed anti-Sandinista resistance movement and were strongly supported by the United States. The contras' resistance, combined with a U.S. boycott that devastated the economy, undermined Sandinista control. Internationally supervised elections were held in 1991. As in the majority of Latin American states that had democratized since the 1970s, the Marxists did not win a majority of the vote in Nicaragua but continued to participate as a significant player in the democratic political process.
Revolutionary socialism seemed to "fit" Latin America's two-class society, but it was strongly opposed by the Roman Catholic Church, the armed forces, and the oligarchy. Meanwhile, the Great Depression ushered in a series of revolutions that placed power in the hands of the middle class, began an era of organized labor's political influence, and fostered the emergence of Marxist-socialist political movements and parties. The twenty years that followed were plagued with instability as communist, authoritarian, and democratic groups vied for power.

In 1959 the Cuban Revolution, led by Fidel Castro, established the first Marxist-Leninist regime in Latin America and set an example for like-minded movements throughout the region. Cuba became an active participant in regional politics and engaged in extensive revolutionary activism abroad. Its alliance with the Soviet Union led to the Cuban Missile Crisis of 1962, with the American discovery of Soviet nuclear missiles being assembled in Cuba leading to the brink of nuclear war.
Like other Latin strongman leaders (caudillos) of his generation, Castro, a socialist caudillo, claimed to personify his country, led through repression, and had no tolerance for political dissidence. He ushered in attractive changes in health, education, and social mobilization, but his administrative mistakes, combined with the fall of communism abroad and a continued American boycott, have left Cuba's increasingly declining economy with little prospects for recovery. What began as a popular revolution deteriorated into the last communist dictatorship in the region, one mired in poverty and oppression.
Guerrilla Insurgents

However, in the 1960s, at the height of its regional influence and revolutionary appeal, Cuba joined with the Soviet Union in funding and training Marxist guerrilla groups throughout Latin America. Following Cuba's lead, these movements chose armed conflict over electoral competition as a means to their deliverance from exploitation. What followed in many countries were two decades of civil wars and military-authoritarian rule as powerful elites turned to their armies, as well as to the anticommunist strategies of the United States, to repress the guerrilla insurgents. The most successful guerrilla insurrection was the Sandinista Liberation Front in Nicaragua, which eventually established the second officially socialist regime in Latin America. Although this regime was ousted through elections in 1991 with the help of an economic boycott and support of anticommunist Contra forces by the United States, Marxists remained a powerful force in the newly democratic system. As a wave of democracy began to overtake the continent by the late 1970s, many communist and guerrilla movements transitioned into political parties and contested for power through the democratic process.

Diverse forms of Marxism and communism developed in other countries, reflecting their diverse histories, sociologies, and levels of development. Indeed that was a major problem for Marxist movements, how to adapt a quite rigid ideological formula to different nations and circumstances. In Peru the socialist Aprista movement and the more rigid communist groups were bitter enemies for decades. Nicaragua had Christian socialists as well as independent Marxists and Leninists. Colombia has four different Marxist and guerrilla movements. Throughout the continent, rivalries between socialists and communists, and various types of each, have been intense.

As the twentieth century came to a close, a phenomenal shift occurred in Latin America from authoritarian and—in the case of Nicaragua but not yet Cuba—communist regimes to incomplete democracies. With the fall of the Soviet Union and the poor economic and social conditions of the four remaining communist states in the world (China, North Korea, Vietnam, and Cuba), the Marxist-Leninist model was less appealing than ever. The nineteen Latin American democratic states, with Cuba remaining the only nondemocratic one, each had a unique experience with a liberal transition, but the region as a whole changed from a rural peasant-agricultural society to a modern, urban, industrial, and diversified one. While it experienced improved economic conditions, better human rights records, and political liberalization after its transition from authoritarianism, Latin America was still far from stable in the early 2000s.

The gap between rich and poor was the largest in the world and still widening. Economic development was continuing at a slow pace, with major collapses in several states. Political participation and civic engagement were not entirely free; patrimonialism, cronyism, and corruption continued, with most governments closely monitoring and regulating political parties and associational life. In the view of most Latin Americans, democracy had yet to deliver on its promises, and polls indicated declining support for it. This disillusionment, exacerbated by the continued two-class system and the dire straits of the poverty-stricken masses, made a return to authoritarianism increasingly appealing to many Latin Americans and led to a revival of Marxist language, but a resurgence of communism or communist parties is highly unlikely. With globalization, new openings in free trade, and numerous successful models of liberal economic and political systems worldwide, it is unlikely that Marxism-Leninism will be revived or that even the Cuban regime will remain communist for long after the eventual passing of the resilient Fidel Castro.

While the turn of the nineteenth century ushered in a wave of socialist ideology that gained much momentum in the art, culture, and politics of Latin America, with the new millennium came a waning tide for socialist ideals and movements. The twentieth century witnessed varieties of communist movements in Latin America, including international Marxists, Fidelistas, guerrilla insurgents, and communist parties participating in the political process. Although democracy seems to have outlasted the alternatives, the book is not closed on the future of the partially consolidated and still transitioning democratic regimes of the region. With continued economic and political instability and an exceptionally large income gap, Latin America might be ripe for renewed Marxist appeals, as it was in the late nineteenth century. Although guerrilla insurgents and socialist parties remain and leftist coalitions may be securing power in states such as El Salvador, the future may likely see a rise in new forms of statism and authoritarianism, but a return to the failed model of Marxist-Leninism or even a resurgence of strong Marxist movements is unlikely.
Links:
After the Cold War: Views From Latin America; Sweeping Political Changes Leave Latin Poor Still Poor
​US Foreign Policy in Latin America 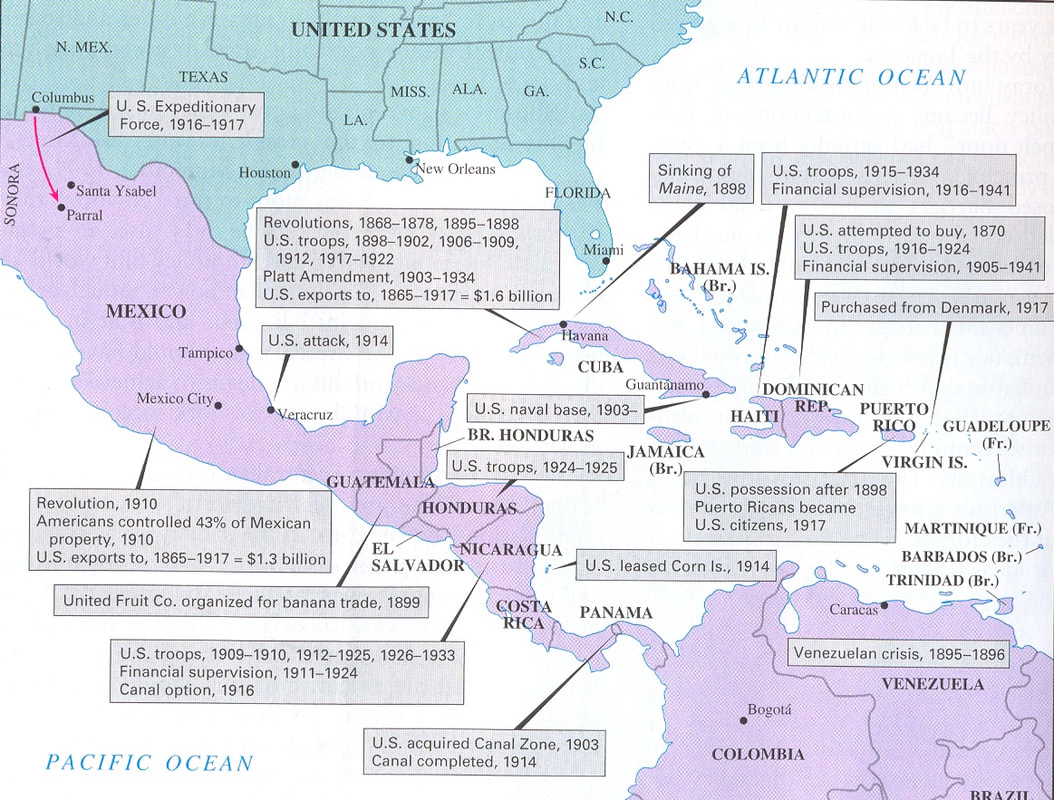